Many thanks to Thos Maye and Mary O’Mahony (Shannon Park) for contributing many of the photos used in this section of the website. It is much appreciated. 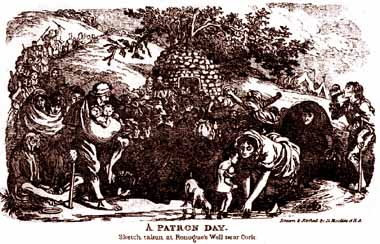 he first recorded church in Carrigaline was Cill na gClearach, the Church of the Clerics, from which the townland of Kilnagleary derives its name. This church dated from the seventh century and the monks who founded it were most likely associated with St Finbarr’s Monastery in Cork.
Cill na gClearach is a reminder to us of our ancient Christian traditions, passed down over the centuries. 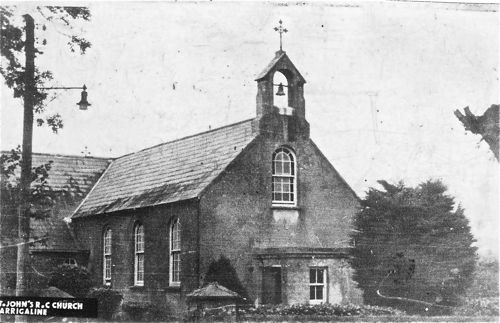 For many hundreds of years Carrigaline and Crosshaven were linked together as one parish, and it was only twenty-five years ago, on 9th September 1982 that Carrigaline became a parish in its own right.

The Chapel of St John the Baptist on Church Hill, first built in 1796, was the local place of worship for the people of Carrigaline until the opening of the Church of Our Lady and St. John in 1957. 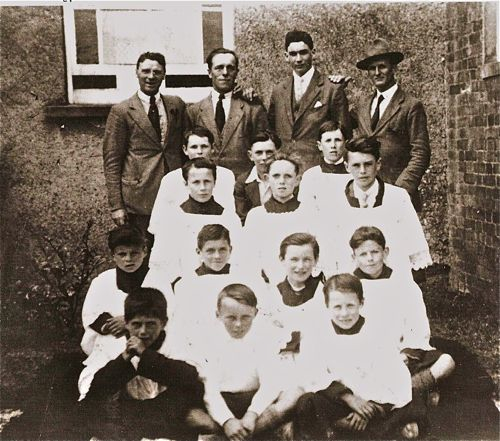 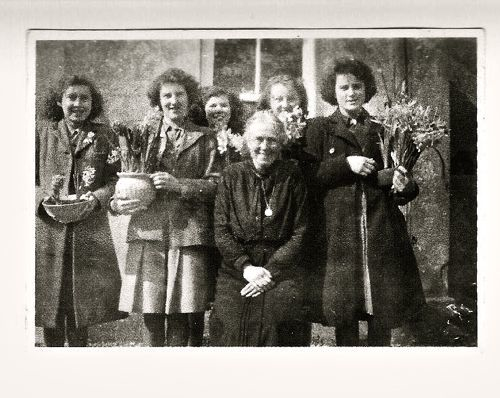 1950? Ash Wednesday, Chapel of St. John Getting the Altar of Repose ready.Frankie McSweeny, Lylie Cogan, Carmel Ahern, Eleanor Conron, Theresa Cogan, Phillie O’Donovan Shortly after Fr. D. J. Deasy’s appointment as curate in 1951 discussions began about the overcrowding at the chapel and finally a decision was made to build a new church in Carrigaline.

Photo of Eleanor Conron after 50 years service as Sacristan. 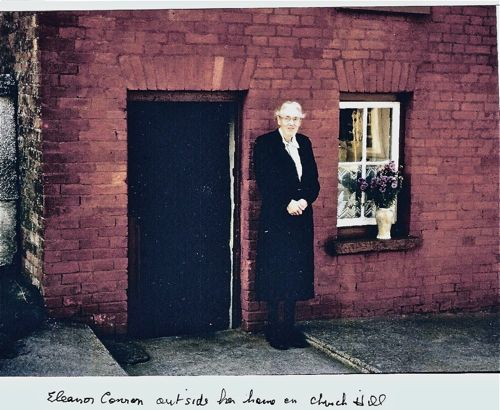 1957 photo of Eleanor Conron on retirement, standing outside her house on Church Hill, Carrigaline 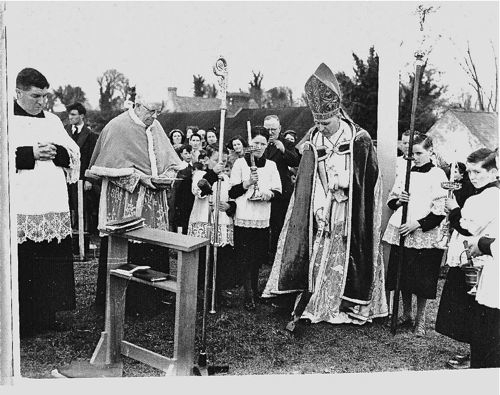 Bishop Lucey turning the sod for the new church.

The first sod of the new site for the Church of Our Lady and St John was blessed and turned on the Feast of the Annunciation in March 1955 by the Bishop of Cork, Most Rev. Dr. Lucey.

In the nineteen twenties the Canty family had presented the site for a new church to the parish. Before the work on building the new church had started the collection from the local people had passed the £7000 mark.
The Diocesan central fund contributed £13,000, local fundraising efforts totaled £20,000 and the Edward Geary bequest in 1918 had grown in value to £19,000 all of which meant that the debt was cleared within one year. 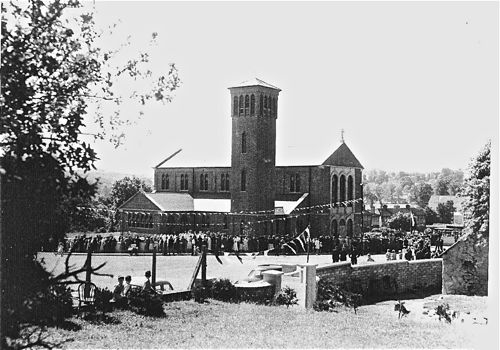 Opening and Blessing of Our Lady and Saint John’s Church, June 1957 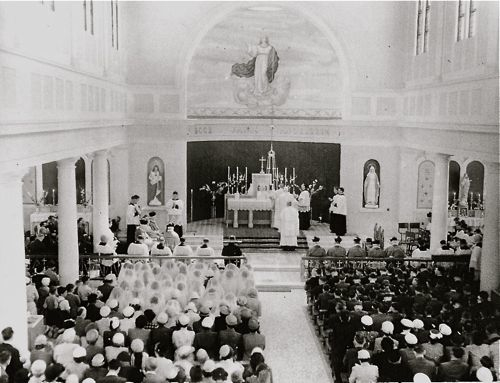 The church was officially opened by Bishop Lucey on Trinity Sunday 16th June 1957, when a procession from the Chapel to the new church was led by the Carrigaline Pipe Band to where the Bishop was waiting at the door of the new church. 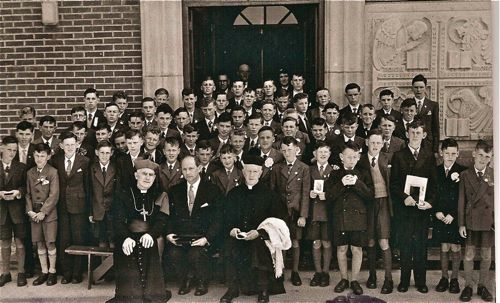 Photo of Crosshaven and Carrigaline Boys after Confirmation, June 1957 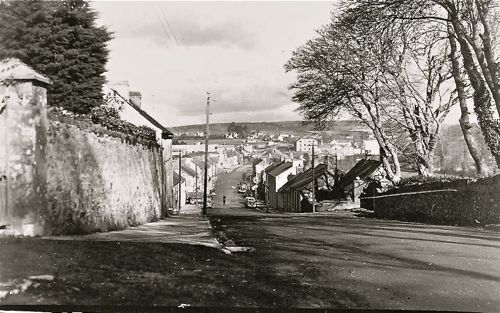 The furnishing of the Church of Our Lady and St. John

The relief sculpture at the front of the church was designed and executed by Seamus Murphy, the stained glass by Cormac Mehigan, and the mosaics by Irish Mosaics, Roscommon. The red brick was supplied by Kingscourt Brick, Co. Cavan.

Links with the Chapel of St. John the Baptist remain in that the sanctuary lamp and baptismal font which date from 1893 were transferred to Our Lady and St John and are still in use.
Furthermore the pedestal flower holders on either side of the Grotto across the road from the church were formerly the Holy Water fonts in the north and south porches of the Chapel.

In 2001 on the initiative of the then parish priest Canon O’Brien an old english organ was installed in the church. It was built in 1891 by Alexander Young in Manchester and suffered bomb damage during the 2nd World War. It was restored by Jardine & Co. in 1948, and when it finally became redundant was located by the Cork based organ builder Dermot Locke and transported to Carrigaline.
It was cleaned and fully restored on installation in our church. It is a two-manual and pedal instrument, with full mechanical (tracker) action and is in original condition.
It is probably the only organ built by Alex Young in Ireland and in the opinion of a number of experts is an excellent quality instrument.

The parish church of Our Lady and St. John is the focal point of our Christian lives in Carrigaline, a church of which we can be justifiably proud.
We acknowledge: the kind permission of Mrs. Mary O’Mahony to use material from “The History and Folklore of Carrigaline” by the late Mr. Sean O’Mahony.

Some local history of the parish of Carrigaline taken from the website of the Diocese of Cork and Ross.

A union of the ancient parishes of Carrigaline and Templebreedy; in 1704 it covered Carrigaline, Templebreedy, Liscleary, Monkstown and Kilmoney. The parish of today is, therefore, smaller than the original. For all that, the antiquity of Carrigaline is uncontested: it can be identified as Cell-na-Clerach, the modern Kilnaglery, as far back as 1199 when a Roman document listed out all the parishes of the Diocese of Cork.
Carrigaline itself was a stronghold of the Ui Liathain sept from earliest times until it was granted to the de Cogans in Norman times. They built Carrigaline Castle on the ancient site of the Ui Liathain’s and it was they who built the church mentioned in 1199 and which was dedicated to the Blessed Virgin Mary. This church fell into Protestant hands in the 16th century.

There is no tradition of any penal altar site in this locality, but there are traditions of an upper and lower cill: a name still applied to the area on the east side of the Cork/Carrigaline Road. The existence of an old chapel is thus indicated.
Tradition also recalls Toberabbog, Tobar Eoin Og or St. John’s Well, situated in Carrigaline West and popularly known as Saint Rannog’s Well. It was a favorite venue on St. John’s Night, 24th June.

The earliest post-Reformation Church of which we have information stood almost opposite the road from Carrigaline to Ballyfeard. It lasted from about 1750 to 1796.
On 10 October 1796 a new church dedicated to St. John the Evangelist was built on Shinbone Hill by Rev. John Callanan, who was parish priest at that time. A chalice in use in this church had the date 1716 inscribed on its base with the information that it was made for Father Callaghan McCarthy. The Parish Registers for Carrigaline begin at the year 1803.
The present church of Our Lady and St. John was opened in 1957.

For more information on the present church have a look at the history of the Church of Our Lady and St. John on this website.